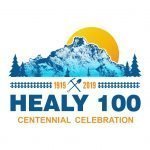 Healy, the largest community in the Denali Borough celebrated its Centennial in 2019.

View a written history of the area, written by Beverly Mitchell, a long time Healy resident.

View the storyboards from our centennial celebration, for a quick overview of history and contributing industries.

The area broadly known as Healy today, found its start in mining, when the United States Geological Survey explored the local area to evaluate mineral, timber and animal resources.   The significant and visible coal reserves caught the surveyors attention, and in 1919 the first coal mine operation began.   This is also the time when the Alaska Railroad (known then as Alaska Northern Rail) reached the coal fields, and Healy was born as a railroad community.

By the 1940’s, in the area now known as Healy River Valley, a series of mini-communities had formed at each mining site.   Over time, the mining operations consolidated or closed, until only Usibelli Coal Mine remained.   Gradually, the mini-communities formed in the Healy River Valley relocated.   Initially to the newly formed railroad community, and then in 1985 to the current town location.